Free Shipping on All Ebikes

In Stock
Ships in 2-3 days from California

See What’s more in the box

What's in the box?

We’ve got you covered with essential accessories to kickstart with your new Ebike!

Free shipping to the lower 48 states in the US. We do not ship to PO boxes or APO.

All Snapcycle bikes cover a 1-Year warranty for the original owner against all manufacturing defects.

If you don't love it, send it back for a full refund. Return shipping fee applies.

Adding product to your cart With 750W sustained, 1200W peak power and 85Nm of torque at your disposal, the high-speed brushless geared hub motor can help you conquer the most rugged terrains easily.

Our batteries are rated 48V-14Ah and are made of premium Samsung INR18650-35E cells, which are renowned for their long lifespans and excellent performance. The battery management system (BMS) complies with EN ISO 13849-1:2015 standards and comes with temperature protection features to enhance its durability and safety. With each charge, you'll get to enjoy up to 45 miles of range on pedal-assist mode, and up to 30 miles on pure electric power mode. The sensitive Tektro brake system comes with low-noise resin pads, and 180mm front and rear disc rotors. It also has automatic caliper centering features and can provide smooth and effective braking even in the harshest conditions.

The half-twist throttle prevents accidental activation of the electrical motor, protecting you from injuries. It only takes less than 5 hours to fully charge the battery, which greatly shortens the time between rides to keep up with the rapid pace of your commuting demands. This fast charger is certified to UL standards and its safety and reliability are guaranteed.

You'll love these features on your Snapcycle R1 The intuitive display provides real-time information about your ride, including mileage, battery level, speed and power. It also provides diagnostic information to its users. The spring suspension fork has 80mm of travel, with preload adjustment and lockout. It is able to dampen the roughness of the terrain, providing a smoother, more enjoyable ride. This foam saddle on the bike is ergonomically designed to ensure a comfortable and fun ride. You can adjust it upwards, downwards, forwards and backwards- find a comfortable position that suits your riding style. It’s getting dark. Turn on your headlight to illuminate the road ahead. It also helps with your visibility at night. The control pad has push buttons which allow you to easily control the bike with your left hand while riding. Our bikes also come with a built-in horn. The sleek-looking frame holds an integrated battery that provides you with all the fuel you will need to power your bike through the toughest terrains. High quality Shimano gears and derailleurs enable you to maintain a comfortable pedalling speed, regardless of road conditions. The sturdy rear rack with a vertical pillar is capable of carrying loads up to 110 lbs. You could bring a pet or a child along for a ride in the morning. *Snapcycle has the right without notice to the consumer to substitute components of at least equal quality for advertised Snapcycle ebike components in the event of the unavailability of such advertised components. I love this bike, its has to most power I have enjoyed on any of my e-bikes. Nothing can stop it, look at this hill, doesn’t care. I have gone 50 miles on a single charge with still some battery to spare. I will say this is my first step through and it’s a bit wobbly going down hills. I also typically ride hands free and I can not with this, it’s not rigid enough. My only issue is the hydrolic brakes seems to get soft after about 1000 miles. Having worked on bikes for years I have found it tricky to get them back to factory resistance. Using all the methods including a full bleed they still get spongy. Not sure if it’s a product of the bike or brakes ( Logan). I have had a couple flats too but thats to be expected. Customer support has been super responsive and supportive. I hope to see this when I open egebikes.com 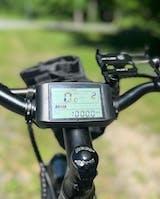 In 2019/2020, I had two spinal fusions and had to give up riding my motorcycle, playing basketball, tennis, surfing, and even riding a modified bicycle. I thought I would never get out again...until getting on my Snapcycle step-thru model. I now can exercise with assistance, and the ergonomics of my Snapper (pet name) are perfect for my body structure at 6'2. I still live in pain, but now I can get out of the house and enjoy the outdoors here in Maui, Hawaii. I was going insane, thinking I would never be able to do anything fun again. Mahalo SnapCycle, this bike is a game changer and has restored my sanity. Aloha Dave 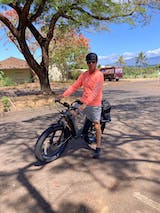 I first want to say that my r1 Snapcycle is everything it was supposed to be. I also want to s Snapcycle is a company that listens to their customers. When I was researching ebikes Snapcycle got good reveiws on YouTube but in a few cases they would say I wish that Snapcycle would do this or that to the bike. And they did I think everything like hydraulic brakes, a 7-speed rather than a 6-speed, etc, etc. To me this is a company that is a leader in the industry because they listen to the customers which makes them stand out. Now as far as my r1, I am disabled and my wife would have liked me to go on rides with her. I told her I would like to and I want to try to get stronger, but I felt an ebike would help if I was unable to get back from the ride. Now I can, and after a few rides I really like that I'm able to enjoy being able with confidence to ride without fear of not being able to complete the ride . Thank you, Snapcycle!

I bought the R1 primarily as a commuter and so far it has been excellent for that purpose. I expect to pay for it in less than a year at current fuel prices.
I added panniers and a left hand mirror and it does what i need it to do - get to work quickly without sweating a bunch (no shower at the office).
No worries about battery range as I have about 6 miles one way. The relatively quick charger should be handy but haven't really needed it to be fast... yet.

The bike isn't built for serious off road/MTB terrain, as any person doing serious pre-purchase research should know already. The rear hub motor, light components, and front suspension only aren't built for that. You'll need to spend a couple grand more (at least) if that's what you're looking for.

I would recommend tube "slime" and something like Mr. Tuffy tube protectors - the tires are not heavy duty by any stretch and being fat, well, they cover more area to pick up more pokey things. The stock tires are not very aggressive and do slip on loose surfaces, so be aware. Hardly a deal breaker.

The headlight could cover a wider angle but the integrated tail light is excellent for visibility to drivers etc.

Jury is still out on hydraulic brakes - we'll see come time for maintenance but they certainly work well new.

I like that you don't have to have a key to turn it on, only keys to lock battery in. Some might not like that considering theft safety but I think there are other deterrents in trade for the convenience.

Gear ratios are too low for the higher speeds so you're "free-wheeling" with no pedal resistance at high speeds. Again, not a deal breaker for me but something to consider.
Needs at least one more gear on the cassette IMO.

Really appreciate the "extras" rear rack and fenders are included.
Also, the bike was took maybe an hour with 2 people to put together. Most components are pre-assembled.

Overall, very satisfied within the short time that I've had the bike.

Where do you ship from?

All our bikes are shipped directly from our warehouse in California.

Can I test ride a bike?

Yes you can, but our test ride network is currently limited to a few states. You can check them out here.

Is the seat height adjustable?

Yes it is. We use a quick-release seat post clamp mechanism in all of our bikes, which makes for swift and simple adjustments.

Do your bikes come in different colors?

At the moment our R1 and S1 series come in a single color, but we'll be looking to offer color variations in the near future, so stay tuned and keep an eye on this space!

Do your bikes come in different sizes?

Presently, they only come in a single size, but they're suitable for riders between 5'3~6'4. If you're outside of that range and would still like to know if the bike will suit you, please drop us a message and we'll give you our personal recommendations.

Are your bikes waterproof?

Our bikes are water and dust resistant, rated IP54. This means that they can be ridden in the rain, but we would still advise against leaving them exposed to the elements. We would also recommend cleaning your bikes with a damp cloth instead of hosing them down, to prevent damage to any components.

Where can I get my bike serviced?

Being a consumer direct business, we currently do not have physical service centers available. We do, however, have retail partners that stock spare parts and work with us closely to provide aftersales support for our customers. Alternatively, we can provide remote support via video calls, more information can be found here.